From its conception as an undergarment for labourers in the 19th Century, to its first
reference in popular culture in F Scott Fitzgerald’s 1920 novel This Side of Paradise and
universal recognition on Marlon Brando in 1951’s A Streetcar Named Desire, the t-shirt is a hugely underrated garment capable of traversing traditional gender roles in addition to hosting a call to arms.

Granted, the t-shirt is a canvas to disseminate art and is art in its own right. However, it is also a means of appropriating an image or message. If the t-shirt can be used as a tool for change, then designers have chosen to do so with an explicitly political agenda.
Though it was Barbara Hulanicki who broke the status quo in Britain and started marketing the T-shirt as a fashionable garment for women in 1964, it was anti-war designer-campaigners Vivienne Westwood and Katherine Hamnett, who saw the potential of the T-shirt as a platform for political messaging. (see image of Prime Minister Margaret Thatcher greeting fashion designer Katharine Hamnett, wearing a t-shirt with a nuclear missile protest message. 17th March, 1984. Press Association)

By the time Westwood released Climate Revolution in 2009 the t-shirt was very much
cemented as a conveyer of the political message, however its connections to ethics and
sustainability run far deeper than this.
Dame Vivienne Westwood says; “I use my fashion as a medium – I give my fashion shows
titles like ‘plus 5degrees’, which is the temperature that the world would become
uninhabitable at. It looks good on a t-shirt and sends out a message. There aren’t many T-
shirts that have got something interesting to say on them, there should be!” 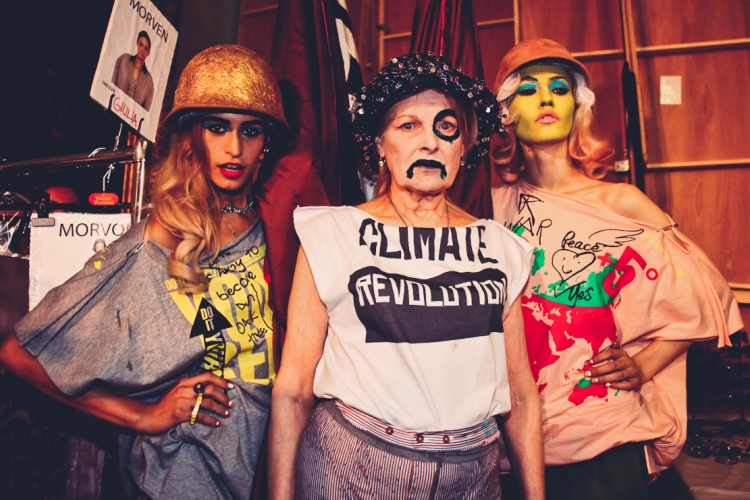 Much like the provocative activist messaging of Katharine Hamnett and Vivienne Westwood in the ’80s, a recent resurgence reflects the symptom of frustration in today’s political climate. Maria Grazia Chiuri, the first female designer to head Dior sent down a tee on the runway at her SS17 show that read “We Should All Be Feminists”, emphasizing the role of the t-shirt in contemporary political, social, and cultural debates. It would seem the runways have again been brooding with political commentary and reacting to a world in crisis.

Simultaneously a reflector of mass culture and singular messages, the t-shirt is anything but basic.