We had a 5 week project to produce an ‘interactive invitation’ for Middlesex University’s BA Fashion Show at the end of the year and this had to include a short film.
I chose a bit of a dark concept having watched way too much Dexter, I used ‘Blood, Sweat & Tears’ as my inspiration and chose to film ‘behind the scenes’ shots of a BA Fashion Degree (cutting, sewing, general tension and stress). With the creepy film, I wanted to make a not so creepy hard copy invitation that would actually be sent out to guests, so I made the physical sense of blood, sweat and tears… 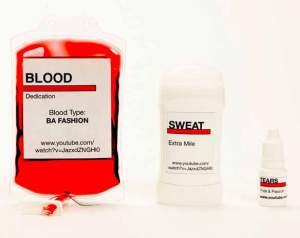 The ‘blood’ is actually raspberry flavoured liquid from Halloween, the ‘sweat’ is an antiperspirant and the ‘tears’ are eyedrops. The invitations are sent out in pharmacy bags prescribed to the ‘patient’ or guest.
Without further ado, here’s the the film:
Directed by Sufiyeh Hadian,
Shot by Matthew Thomas
Music by Thom Yorke ‘Hearing Damage’