For my one of my Final Major Project briefs, I’ve chosen to re-brand Star Wars characters (geek.) including C3P0, Darth Vader and Stormtrooper, and collaborate them (hypothetically) with different fashion designers. This will then go on (hypothetically) to exhibit in Selfridges Concept Store, celebrating Star Wars coming out in 3D in 2012. oh & I’m also going to create the styled shoot’s in analglyphic 3D (red & cyan).

Here’s a sneak peak of my styling ideas.. 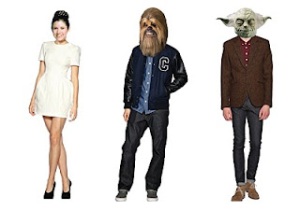 Princess Leia for Hussein Chalayan, Chewbacca for Carhartt and Yoda for Paul Smith.